Tweet:  With a wink and a nod, Anthony Horowitz has delivered a classic whodunnit with a modern twist. Smart, fun, and definitely stay-up-all-night-able!

When was the last time you stayed up all night to finish a book? For me, it was just this week when I started Magpie Murders, a compelling mystery within a mystery, and then could not put it down.

The novel begins with Susan Ryeland, Head of Fiction at Cloverleaf Books, sitting down to read the manuscript of Magpie Murders by best selling author Alan Conway. From the outset, we know something is different about this book. She narrates:

"I opened the wine. I unscrewed the salsa. I lit a cigarette. I began to read the book
as you are about to. But before you do that, I have to warn you.

This book changed my life."

Who could stop reading after that?

Tweet: A gripping mystery with a fascinating, original protagonist. Once started, impossible to put down.

I picked up Rubbernecker by Belinda Bauer because the cover button announced “WINNER 2014 Theakston Old Peculier Crime Novel of the Year Award.” This will be great, I thought. I love old peculiar crime novels. Silly me. I didn’t know that that Theakson Old Peculier is a British ale, or that the company sponsors one of the top crime writing festivals in the U.K.  Its 'Crime Novel of the Year' designation is a coveted and well regarded award, notable for allowing the public to vote in addition to a jury.  Well, I may be an idiot when it comes to beers, but I definitely know crime novels and mysteries, and here is what I know about Rubbernecker:  It is truly an excellent read.

(Continue Reading)
Posted by Miriam at 9:32 AM 2 comments:

The Life Changing Magic of Tidying Up by Marie Kondo

Tweet:  A wonderful book for the hopeful declutterer that focuses on joy, order, and yes, changing your life. Believe it or not, it works.


My home never seems to be neat. I’m not a hoarder; more like the Glamour Don’t of Housekeeping. I have tried every decluttering method, purchased half of the Container Store and followed Flylady.net religiously, all to no avail. I admit it: I am a slob. So when Marie Kondo’s tiny tome, The Life-Changing Magic of Tidying Up,  appeared in the B&N best seller bay, I did my best to ignore it.  But after weeks of watching it walk out of the store with multitudes of housekeeping hopefuls, I succumbed to its peaceful cover and brought it home. It promised magic, but did it deliver? Here’s what happened to me…

Once We Were Brothers by Ronald H. Balson

Tweet:  A taut and compelling novel about family and betrayal during the Holocaust.  An important story for young adult and mature readers alike.

Once We Were Brothers opens with Ben Solomon, an 83 year old Holocaust survivor, stuffing a Lugar into his tuxedo cummerbund and heading to the Chicago Lyric Opera opening night gala.  Once there, Ben seeks out Elliot Rosenzweig, a wealthy scion of Chicago business and philanthropy, points the gun at him and publicly accuses him of being a Nazi named Otto Piatek.  Elliot, also a Holocaust survivor, refuses to press criminal charges although he adamantly denies being a Nazi.  However Ben, firm in his conviction, retains attorney Catherine Lockhart to sue Rosenzweig for stealing his family's property during the war.

The rest of the novel alternates between Ben's narrative of growing up with Otto Piatek in Poland and Catherine's legal maneuverings to pursue Ben's claim.  Ben's story of his family before and during the Nazi occupation is a compelling page turner.  Because Catherine seems to have little knowledge of the Holocaust, Ben carefully tells of his family's actions and motivations.  He explains why they initially chose not to leave Poland, and sensitively describes the war's increasing horrors in a manner more harrowing than graphic.  At the heart of the story is Ben's relationship with Otto, who was raised by Ben's family but ultimately betrays them.

(Continue Reading)
Posted by Miriam at 6:00 PM No comments:

What to Read Next: BEA Speed Dating

I've just returned from BookExpo America, the largest annual trade show where publishers showcase their new titles for booksellers, librarians, media members and book industry professionals.  I saw plenty of celebrities (Jim Carrey, Snookie and Grumpy Cat, to name a few), met famous authors (like Elizabeth Gilbert and Scott Turow) and schmoozed with some of publishings' biggest bigwigs.  I also attended several seminars and panel discussions.  One of my favorites was the Book Group Speed Dating sponsored by ReadingGroupGuides.com.

For the session, I sat at a round table with other sellers, librarians and  book group leaders.  Every nine minutes a different publisher representative rotated to our table to preview upcoming titles.  Each presenter's enthusiasm was contagious, and although I know I won't get to all of them, here are some of the books I'm especially looking forward to reading: 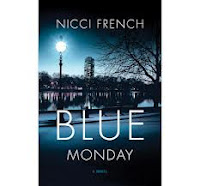 Tweet:  A psychoanalyst who breaks her own rules.  A detective haunted by an unsolved crime.  An excellent, complex British mystery.

Dr. Frieda Klein, a London psychoanalyst, lives an ordered and private life.  She keeps her practice small so she can properly absorb and think about her patient's issues.  She follows therapy protocols exactly, meeting her patients only in her office, a designated "safe" space, and never lets them enter her own protected space.  As Frieda explains, "[y]ou can't change your patient's life.  You just have to change the patient's attitude toward life."  But when a new patient reveals a detailed fantasy that echos a child kidnapping case in the news, Frieda feels compelled to act and bring her concerns to Detective Malcolm Karlsson.  Together they try to unwind a complex psychological puzzle with roots more than twenty years old.

As a protagonist, Frieda Klein is ascerbic and complicated and quietly brilliant.  Author Nicci French deftly avoids gimmicky plot twists, instead maintaining taut suspense throughout the novel that keeps one fascinated until the end.  French (the pseudonym of writing partners Nicci Gerrard and Sean French), has created multi-layered and complex characters that I look forward to seeing again.  Fortunately, I won't have to wait:  the next Frieda Klein novel, Tuesday's Gone, is in bookstores now.

This is Where I Leave You by Jonathan Tropper

Tweet:  Nothing brings a family together like death and dysfunction.  A very funny and poignant novel, expertly crafted and delightful to read.


Jonathan Tropper's This is Where I Leave You  is at once hysterical and sad, the story of  a dysfunctional family who has gathered to mourn their father's death.  At his request, the family will sit shiva together for seven days.  Judd Foxman, the narrator and the third of four siblings, arrives at his childhood home with a marriage that has combusted.  (His wife who is in the midst of an affair with his boss has just announced that she is pregnant.)  The siblings have for years avoided being in each other's company for any length of time.  As Judd observes,

"Sometimes it's heartbreaking to see your siblings as the person they've
become.  Maybe that's why we all stay away from each other as a matter
of course."

As the week goes on, the family unpacks old resentments and misunderstandings, forcing Judd to reassess his role in contributing to the family dynamic as well as the demise of his marriage.

While the family renews their relationships with each other, Tropper perfectly captures the staccato and bravado of sibling banter.  I both cringed and laughed out loud at the barbs they lobbed at each other, some in-your-face and others quietly nuanced, designed to substitute for the Foxmans' "patented inability to express emotion during watershed events."  Added to the mix is the brashly delivered wit and wisdom of their mother, ironically a psychologist and child rearing expert who harbors secrets of her own.

In addition to the siblings and their mother, Tropper orchestrates a fabulous group of ancillary characters who bring humor and pathos to the struggling family.  Each sibling is joined by a spouse or significant other who adds another level of chaos to the mix.  For seven days, a menagerie of friends and relatives visit in a steady stream, providing diversion and comic relief as old wounds surface.

By the end, most issues are resolved, but never flippantly.  The Foxmans will continue to poke each others' bruises as only siblings who love each other can do.  And while Judd does become more self-aware, he still has room to grow.  Tropper clearly cares about Judd and this family, and I can only hope that he will write about them in a future novel.  They deserve to be visited again.

A few weeks ago, Ida, a customer 92 years old and still going strong, asked me to recommend a book.  She had just finished The Sense of an Ending  by Julian Barnes and wanted some more “serious” reading.  After further discussion, I recommended Middlesex by Jeffrey Eugenides.


“Let me see it first,” she demanded.  I brought her the 544 page book.  Without even opening it she shook her head and said, “No, that won’t do.”  When I asked why she rejected it off the bat, she told me it was just too long. "I want to be sure I’ll be around to finish it,” she explained.
That interaction got me thinking about how people choose the books they read from the myriad titles available.  Clearly Ida knew what she wanted:  serious books under 200 pages.  But what criteria do other people use?

(Continue Reading)
Posted by Miriam at 5:10 PM No comments:

Not too long ago, I picked up a new mystery and began to read. About fifty pages in, the story seemed somewhat familiar. Halfway through, I began to predict events with eerie accuracy. By the end I realized the source of my prescience: I had read the book before.

While I love to revisit my favorite books, I want to do so with intent and not because my memory stinks. I started this blog primarily for self-consumption: it is a record of the books I am reading. If you have stumbled upon it, please enjoy. And if your memory is anything like mine, please feel free to return. I’ll be here writing about what I read.

Something to Think About

"An honest bookstore would post the following sign above its ‘self-help’ section: ‘For true self-help, please visit our philosophy, literature, history and science sections, find yourself a good book, read it, and think about it."